We will be guided by the Kingston Hydro strategic plan for 2019-2024 to ensure fair rates and a strong future for our customers and community.

Kingston Hydro holds the Ontario Energy Board license to distribute electricity in Central Kingston, Canadian Forces Base Kingston, and parts of Barriefield.

While the corporation owns the wires, poles, transformers and meters that bring electricity from the provincial electricity transmission grid to the doors of 28,000 homes and businesses, the electrical system is proudly operated by the employees of Utilities Kingston.

Utilities Kingston provides customer-focused and cost-effective multi-utility services so that customers benefit from service advantages and scope economy cost savings. Read more about the benefits of this unique model at About Utilities Kingston. 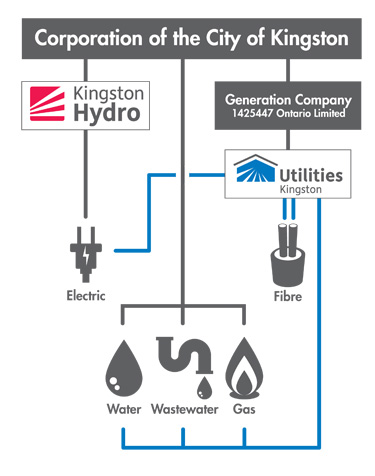 The company owns the following assets:

Kingston Hydro has a long standing history with the residents of the City of Kingston.

The Kingston Electric Light Company was incorporated in 1886. This privately owned company built its first electric light plant in 1888 at the foot of Brock Street. The plant, primarily used to manufacture street lighting, was moved to Queen Street in 1892. This location is still used by Kingston Hydro as a distribution substation. The Public Utilities Commission used this and adjoining buildings as their main offices until 1972, when they moved to 1211 John Counter Boulevard.

In 1998 the Energy Competition Act required significant changes to electric utilities in the Province of Ontario. One of these was the establishment of corporate structures for the ongoing management and operations of electric distribution systems—a requirement that would create a level playing field between privately-owned utilities and those that were retained by their municipalities. Legislation was prescriptive in the way these corporations were to be set up. In particular, municipalities could not continue to distribute electricity, except through a corporation. In addition, employees within a municipally-held electric distribution corporation could not be significantly involved in any other activities except electric distribution.

This created challenges for the municipal department that operated five utility systems. The owner, the City of Kingston, determined it would be advantageous to the City to maintain the multi-utility structure. The organization needed a structure that would meet the intent of the legislation, maintain the advantages realized through utility convergence or integration (one call, one crew, one bill) and support the municipality by utilizing shared services (e.g., finance) where beneficial to both parties.

The proposed solution, which became the current structure, saw the incorporation of three Ontario Business Corporations. The first, Kingston Electricity Distribution Limited (now Kingston Hydro Corporation), holds the assets of the former Hydro-Electric Commission. The second, 1425447 Ontario Limited, owns the third, 1425445 Ontario Limited (operating as Utilities Kingston). The latter is home to all the employees of the former municipal department, and holds the assets of the fibre optic utility, along with some vehicles and tools.

Through this structure, which is unique in Ontario, Utilities Kingston manages, operates and maintains the assets of the City’s water, sewer, gas and electric utilities.